The town of Laholm is Halland County’s oldest town (with town privileges from the 13th century), but the place has been inhabited since 10,000 years ago. Everywhere in the landscape you can see traces of Laholm’s early history. Next to the beautiful power station in the river Lagan in central Laholm you will find Lagaholm’s Castle ruin. Already in the 13th century there was a royal estate here, belonging to the Danish king. Lagaholm Castle was besieged time and time again during the following centuries. In the time of Gustav Vasa and his sons, they tried to conquer the castle without success. Then came the Nordic Seven Years’ War in 1563–1570 and after that the fortifications were completely dilapidated. It was not until the 17th century that the castle was modernized on the orders of the Danish king Christian IV. The building then got a pentagonal shape to be able to withstand the warfare of the new age. With the development of artillery, Lagaholm’s Castle quickly became obsolete again. Charles XI ordered the peasants in the area to demolish it in 1675.

In the 1930s, when they dug out the castle ruins, a lot of beautiful ceramics were found (at display at the Halland Cultural History Museum in Varberg) as well as a large amount of medieval skeletons from the cemetery below the fortress. Under the castle, fireplaces from the Stone Age were found.

Northwest of Lagaholm lies the village Köpinge, which was believed to be a trading place during the Iron Age, ie. Viking period. At the height just before Köpinge you’ll find “King Ise’s burial mound” (Kung Ises hög) – a 4.5 meter high burial mound from the Bronze Age, with a diameter of 34 metres. Given its magnitude, it is probably a powerful individual with high status that lies here. In the surrounding land they have found parts of a sword. Next to the pile stands a menhir which is risen later, probably during the Iron Age.

Gamleby is a picturesque part of Laholm’s town centre, dating back to the 1400s. Here, in the oldest part of the town, you’ll find the old street grid and the irregular town planning from the Middle Ages. The houses are built in woodwork and brick, typical of southern Halland, and they reflect the appearance of the old towns that lived off trade, crafts and agriculture.

Below you will find some interesting historical places to visit!

Lugnarohögen is a burial mound dating to the late Bronze Age, (800-600 B.C.), that became a small sensation at the first examination in 1926. The grave is surrounded by stones laid in the shape of a ship – the first of its kind found in Sweden at the time. After extensive renovation, the grave has been reopened for visitors. 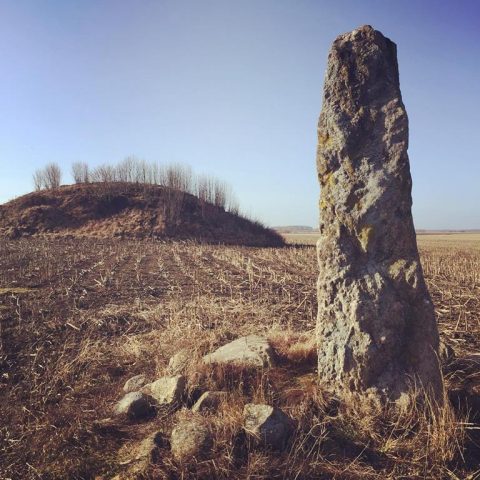 On site there is no parking available, but the mighty hill and the mythical stone are definitely worth a visit. Consider that this place once served as a big trading and meeting place for people from the near and far. Sporadic excavations have shown findings from both the Bronze and Iron ages.

Although the ruins today mostly consist of a road and a power plant, it is nevertheless quite cool to walk around the walls and imagine the castle. Under the castle there are cellar spaces preserved, including an old prison cave.

On the rolling slopes of Hallandsås (Halland ridge) lies the Lassahus stone (Lassahusstenen), a stone block with carvings from the Bronze Age.

Follow the blue hiking trail in Osbeck’s forests, and find it!

The grave field is located on a narrow sand ridge, which must have offered a magnificent view of the sea two thousand years ago, when the landscape consisted mostly of undeveloped heath. The stones are from the Iron Age – 36 of them remain today. Nearby are also four burial mounds from the Bronze Age.

When road 115 below was built, archaeologists found the remains of a house from the Iron Age. Think of it as you pass the location in your car, that you’re driving straight through an old Viking farm. 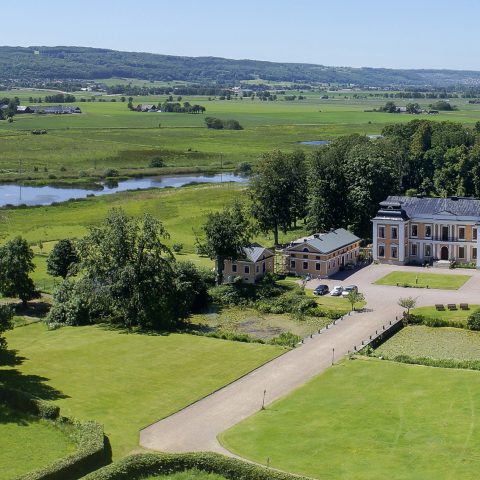 Skottorp’s Castle (Skottorps slott) in Skottorp is one of Sweden’s best kept Empire-castles. King Karl XI and Ulrika Eleonora of Denmark got married here on 6 May 6, 1680. The castle was built during the 1670s, by Frans Joel Örnestedt. The castle is a private residence today. 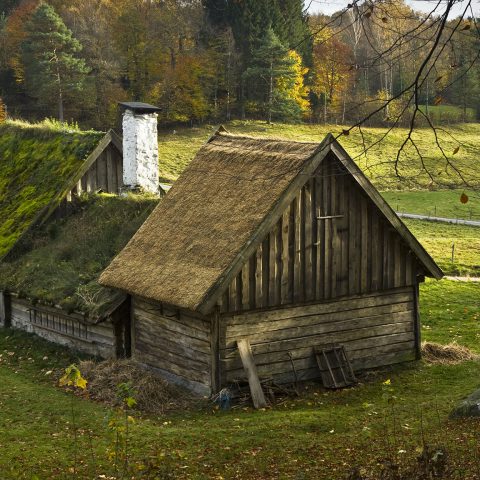 Vippentorpet, located in the forest area between Knäred and Ysby, was built around 1778. The building is typical of its time but has a braided rice gable that is unique for the county. Vippentorpet stands in its original location and as of 2009 it is officially classified as a “building of historical importance” (byggnadsminne).